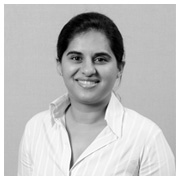 Dr Khami Satchi is an ophthalmologist specialising in treatment of disorders of the eyelids, lacrimal (tear drainage) system and orbit (eye socket).

Her general ophthalmology training from 1999 to 2007 included 5 years at Cambridge and Oxford University teaching hospitals and 3 years at district general hospitals (Reading, Windsor, Huntingdon) in the UK. Her fellowship training in eyelid, tear duct and orbital surgery was at Oxford Eye Hospital (2006), the Royal Victorian Eye and Ear Hospital (2007-2008) and at Moorfields Eye Hospital, London (2008-2009). She was subsequently appointed as a Locum Consultant to the ocular plastic, lacrimal and orbital service at Moorfields Eye Hospital.

Dr Satchi migrated to Melbourne in 2011 and is now a Consultant for the Orbital, Plastic and Lacrimal Clinic at the Royal Victorian Eye and Ear Hospital.

She has given presentations at international scientific meetings and has published 15 papers in specialist journals.

Her areas of specialty include:

Some conditions that
Dr Satchi specialises in